St. Pat’s For All Marches Again! 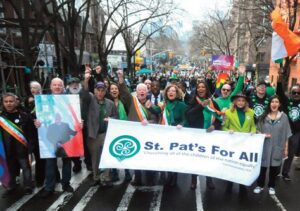 On Sunday, March 6 the annual St. Pat’s For All Parade returned to Sunnyside and Woodside despite some rain. The last St. Pat’s for All parade before this year’s was on Sunday, March 1, 2020, a cold but sunny day that resembled the day of the first parade in 2000.

This year, a man who led that 2020 parade was remembered and celebrated as the 2022 parade’s honoree. He was Tarlach MacNiallais, who succumbed to COVID- 19 on April 1.

That might have made him the honoree at the 2021 parade, but of course there was no such thing. The parade was cancelled last year because of the coronavirus pandemic. Many might have wondered if that blight would cancel the parade for years, or even forever.

But word of the effort to get it going again was a rumor early in this year and be- came an actuality only a short time before the Sunday in March when the event that had become traditional was revived and looked vigorous from the moment it was re-convened, on a truckbed, at the crossing of 43rd Street and Skillman Avenue in Sunnyside. 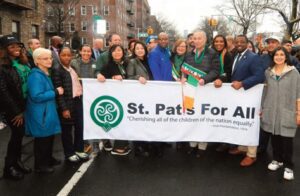 Further praise and remembrance were extended to Tarlach MacNiallais. He was identified as a native of Belfast and an LGBTQ activist in Ireland, Northern Ireland and the United States. Two of his brothers were on the truckbed. One, Brendan, said that his brother’s activism was greatly rewarded when LGBTQ persons were at last permitted to march in New York’s St. Patrick’s Day Parade on Fifth Avenue in Manhattan, March 17, 2016. Resistance had been fierce for some time, and the Queens parade was created as a protest against the intransigence of the Fifth Avenue officials.

The triumph of MacNiallais and other activists was the subject of a documentary film about them that was first shown in Belfast, the year after MacNiallais’s death.

Brendan introduced another brother, Tony, who remembered Tarlach as very competitive. He spoke until he announced that he was overcome, by which time Brendan was standing beside him, clutching his arm. 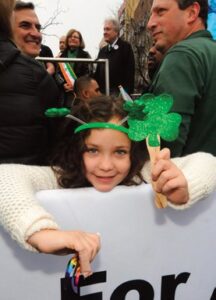 Politicians were there in force, discussing many matters, including New York’s senior US Senator Chuck Schumer, who said he’s been urging the Biden administration to send fighter planes to the Ukrainians. Others were similarly supportive. Still others stuck to state and city issues. Queens District Attorney Melinda Katz declared herself full of pride for the borough. City Council Speaker Adrienne Adams had several Council members in tow and attempted a memory feat, trying to recite all their names and succeeding perfectly. State Senator Michael Gianaris said he has attended every St. Pat’s for All parade so far, 22 in all. Dromm introduced the state’s Attorney General as “fabulous, fabulous Tish James!” She declared she would like to proclaim gay pride in New York, but also in Texas and Florida, and other states that treat it quite a bit less kindly. Queens Borough President Donovan Richards, an African-American, reminded those about to celebrate St. Patrick’s Day that his first name is Donovan. 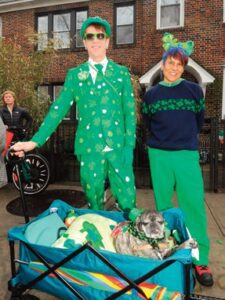 Wayne Murphy and Fabian Garcia with Bruno the dog.

The march began at about 1:00 p.m., as the rain that had fallen intermittently throughout the morning seemed willing to cease pestering the celebrants, and even allow sunshine to appear, also intermittently. Many of the pols declined to make the trek up Skillman to the turn at 56th Street and the finish a couple of blocks later near Roosevelt Avenue. Among the few office-holders doing the entire route was newly-elected City Comptroller Brad Lander, who drew cheers just for being there at the end.

Of course, there were many glad to run the route: Fire Department personnel, including drivers of the gigantic red engines; musical groups, such as Fogo Azul Bateria (Blue Fire Drumline), a Bayside group in a Brazilian mode of percussion; and a surrey driver who made a young girl spectator shriek with delight at the sight of a live horse. 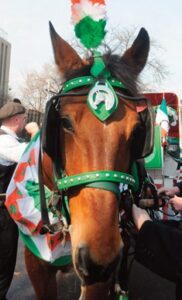 King the horse made an appearance in Irish garb.