Musicals From The Quarantine By APAC 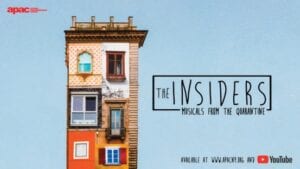 The Insiders is a collaboration of many talented writers, directors, producers and actors.

Astoria Performing Arts Center and Artistic Director Dev Bondarin, in association with Teresa Lotz, present six new musical shorts written in response to the COVID-19 crisis. Featuring the work of 15 writers, five directors, and 16 actors, the contributing artists joined the project in the early days of the crisis in the spirit of developing new work without being in the same room to do so.

Quarantine. Crisis. Connection. Hope. There are many stories to tell right now and with The Insiders, these writers have created six in response to the current situation. From the expressionistic to the satirical, to the reality of family members trying to communicate, each film tells a story based in the here and now while we experience this unprecedented moment of pain in the world together.

The six short musicals just launched online, on May 22. Viewing will be free of charge, but there is a suggested donation of $10 which will benefit Astoria Performing Arts Center and Indie Theater Fund (www.indietheaterfund.org/donate). More info can be found at www.apacny.org.