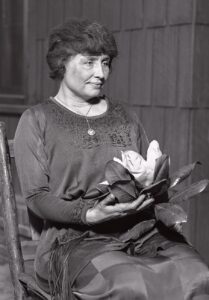 Helen Keller, famous blind and deaf author and Forest Hills resident, was scheduled to speak in Forest Hill on March 1 at the invitation of the citi­zens of Forest Hills.

In conjunction with the Greater Astoria Historical Society, the Western Queens Gazette pres­ents noteworthy events in the bor­ough’s history

Borough Presidents Maurice Connolly of Queens and Julius Miller of Manhattan sent a letter, proposing a tunnel under the East River tunnel to relieve congestion on the Queensboro Bridge, to the Board of Estimate. The tunnel was to be at 38th Street in Manhattan and would connect to Borden Av­enue in Queens.

The cost of the project was projected to be $40,000,000 and could be extended to Tenth Avenue on the West Side of Manhattan for an additional $16,000,000. As with many New York transportation projects, the East River tunnel, in a different form, was not imple­mented until years later, when the Queens-Midtown Tunnel opened in 1940.

The Department of Commerce announced that Americans were using three times as many automo­biles as the rest of the world com­bined. On January 1, there were 19,999,436 autos registered throughout the United States – or approximately one motor vehicle for every five men, women and children in the country.

On February 4 and 5, Queens en­dured the worst snowstorm of the year. The storm dumped 10.4 inches of snow, killed two people and crip­pled Queens transit lines.

On February 4 and 5, Queens endured the worst snowstorm of the year. The storm dumped 10.4 inches of snow, killed two people and crippled Queens transit lines. Motorists abandoned their cars in deep snowdrifts, some of which were eight feet high and 500 feet long. On the 6th, the Queens Street Cleaning Department still had five steam shovels removing snow.

Then a second blizzard struck Queens. An LIRR train stalled near the Woodside station, and passen­gers walked from the train to the station. The snow accumulation was one foot on top of the earlier storm.

On the 25th, Queens’ streets were turned into waterways after a torrential thunderstorm and ensu­ing steady downpour, which lasted most of the night and melted any remaining snow from earlier storms. The gutters of many streets were torrents and other streets were completely impassable. With the sewers taxed to the limit, much of the water spilled into the cellars of homes.

Helen Keller, famous blind and deaf author and Forest Hills resi­dent, was scheduled to speak in Forest Hill on March 1 at the invi­tation of the citizens of Forest Hills. Ms. Keller had been on a tour of the country as a spokesper­son for the American Foundation for the Blind. From 1917 to 1938, Keller lived in a Forest Hills house that eventually burned down after her death.

Although there was growing sentiment in Congress to end Pro­hibition, the laws were still being enforced until some definitive ac­tion was taken. Two Astoria patrol­men, who were known by the name “Detectives Snip and Snoop of the Astoria Precinct,” smelled beer near the Astoria Ferry. They followed their noses until they reached 75 Munson Street (now 2nd Street), the home of Otto Kramer who was later charged with manufacturing and possess­ing beer.

For further information, call the Greater Astoria Historical So­ciety at 718-278-0700 or visit their website at www.astorialic.org.