Eat Astoria: Rose And Joe’s ‘Put Some Love Into It’ 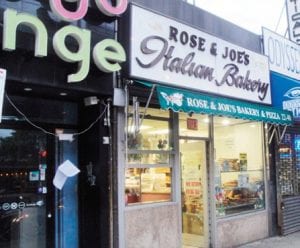 Rose & Joe’s Bakery & Pizza at the corner of Ditmars Blvd. and 31st Street: the old customers still come in, even after they move out of Astoria or even out of New York.

Rose and Joe’s Bakery & Pizza has been in its current location since the mid-seventies. It opened in the sixties under the name Leonard’s on the corner of Ditmars and 31st Street. It’s a family business opened by the current owner’s father. Many customers still come to Rose and Joe’s for its timetested and delicious cookies, cannoli, bread and pizza.

I’ve been coming to this bakery for years, as many customers have. Usually, of course, we come in, purchase our baked goods and go on our way. Some customers I spoke to were surprised when my questions interrupted their pleasant routine. One gentleman, who preferred to remain anonymous, was enjoying a slice of Sicilian pizza. He said he started coming here 15 years ago, even before he lived in Astoria. Another customer, who hails from Iran, told me he always stops by for “some of the best pizza in New York” when he is in Astoria, though he now lives in Manhattan. A young woman, who said she usually buys the sponge cake or apple turnovers, bought a cannoli for the first time.

The pizza has been featured in numerous publications as one of the best in the city that arguably has the best pizza in the world. It’s a no-nonsense kind of place. The pizza choices are Fresh Mozzarella, Home-Style Sicilian, and Focaccia. I asked Anna, the night manager from southern Italy who has been working here for 19 years, what the secret was. She said it was the dough and the sauce, but then added that “you got to know how to make it, put some love into it.” And I bet that also goes into the cookies, the cannoli and the bread the bakery makes.

Anthony Porretto, the owner of the bakery, started helping his father here as a kid. Now his son, Joe, named after Anthony’s father, helps out. Anthony told me that they’ve been using the same recipes since the bakery opened and haven’t changed a thing. They still make the fresh cannoli cream and bake the shells the way they did in the ‘70s, and still make the sauce and the dough for the pizza according to the original recipes. Anthony said the old customers still come in, even after they move out of Astoria or even out of New York.

Anthony’s wife, Anna Porretto told me that she, her husband and their son “aim to please and keep customers happy – whatever it takes,” and that “being in business for so long, it comes naturally.” They want to “keep the product the same and keep customers happy.” And, of course, the people who work here put some love into their baked creations. And that may very well be the secret ingredient.

More From Food Go To The Food Section