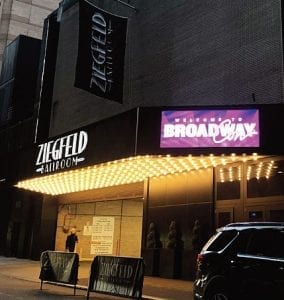 BroadwayCon had its fourth consecutive year in the city last month. Over three days, January 10-12, at the beautiful New York Hilton Midtown, 7,000 fans of all ages gathered for what has now become one of Broadway’s most exciting weekends.

The convention had over 400 of Broadway’s most notable talents, including world-renowned celebrities Tina Fey, Bobby Lopez and Kristin Anderson-Lopez, and surprise guest, Kristin Chenoweth. Writers, actors, directors, and designers gathered on panels to discuss a plethora of exciting, hot topics including Queer Women In Theater, and Musicals and Mental Health. Guests from the casts and creative teams of numerous currently running and soon to open Broadway productions took the main stage for hour-long discussions and Q&A’s via Twitter. From panels, to dance workshops and a Broadway marketplace, there were three full days packed with everything a fan of the theatre could ask for in a New York weekend. The marketplace included Parody Bill, a new independent company that produces content parodying musicals together. Check them out on Instagram @Parodybill; and shows like The Prom and The Other Josh Cohen, and even Beat by Beat. Beat by Beat is a company owned by Denver Casado that focuses on refreshing new musicals for young actors. 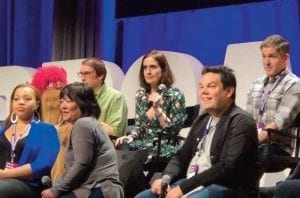 On Friday, currently running shows Mean Girls, Harry Potter and the Cursed Child, The Cher Show, and this year’s most anticipated show, Be More Chill, which opens this week at the Lyceum theatre, took the main stage and discussed stories of the development of the shows from the beginning of their collaborative journey. Audience members were given the chance towards the end of each panel to tweet in questions. One person asked the panel from Mean Girls who was most likely to be arrested. They all immediately pointed at Ashley Park, who plays Gretchen. She was stunned, but Kate Rockwell, who plays Karen, quickly added that it would be a misunderstanding that would eventually be resolved. 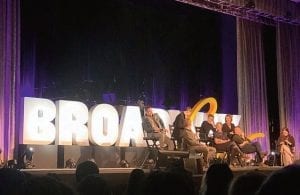 Saturday, two of the most exciting events were the original cast and creative team of the soon to close 2004 Tony award winner Avenue Q and the 20th anniversary reunion of You’re a Good Man Charlie Brown. Avenue Q gave a special surprise of complimentary tickets to the show for those whose questions were asked via Twitter during the Q&A.

Andrew Rannells, original star of The Book of Mormon, and now a big film and television star, was interviewed on his career and new book, Too Much is Not Enough.

Many participants were dressed in their best Broadway cosplay and many entered a cosplay contest. The winner was someone dressed as The Squib from the already so popular Be More Chill. A deserving contender was someone dressed as the Angel from Angels in America. Get your tickets for Be More Chill now, before it becomes another situation like Hamilton, where tickets are only accessible by spending a top premium price on the resale market. 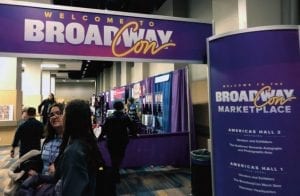 BroadwayCon was an absolute blast and Mischief Management, the company that produced this convention, hosts many more successful conventions that you will want to keep on your radar. Leaky Con, their Harry Potter convention, has become so popular it is taking place in two locations this year for the first time: Dallas in August and Boston in October. Check out mischiefmanagement.com for information on their conventions, from Game of Thrones to Aliens and Podcasts, as well as next year’s BroadwayCon.